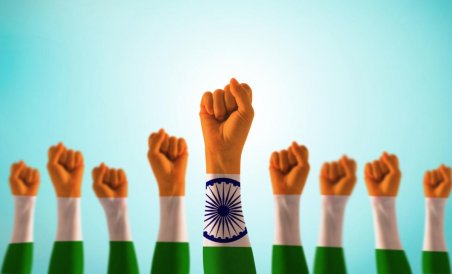 Why do Indians say Jai Hind

Happy Republic Day, fellow Indians and Indians in other parts of the globe! It’s such an emotional moment for me and even you. Some of you must be away from India and celebrate it by hosting your own Indian Flag. Either you have purchased from an Indian shop or have made one at your home. The tricolor flag holds a connection with your heart. I am sure you are always teary-eyed when the Indian National Anthem is in the background. The sound is like sweet music to your ears. Let’s speak about why Indians say, Jai Hind. Are you ready? All patriotic enough! I am feeling much already.

Jai Hind started as a slogan given by Netaji Subhash Chandra Bose to the soldiers to call out for their victories and motivation in the second world war. The Indian National Army fought alongside the Japanese. We have all continued saluting ‘Jai Hind’ as a tribute from our patriotic heart to our beloved nation, India. It instills passion, love, and responsibility towards the development and growth of our nation. Jai Hind is hard as a nutshell in our minds. I had started saying prior to midnight and still speaking in my head while writing this article.

I will tell you how I missed India during my lengthy stay abroad in several countries in Thailand, Europe, USA & Canada. You know how it is, “Phir Bhi Dil hai Hindustani”. This reminds me of the song, which featured SRK & Juhi Chawla.

Why don’t you search about India and its activities on Digital India.

Whenever I used to study in Brussels, Bangkok, Boston, and Toronto/Ottawa, I used to miss India a lot. In Brussels, I was a kid and badly needed a dish tv that connected the Indian channels with the French/English channels. But, as a kid one shouldn’t watch much tv – it is harmful to the eyes. Though I did and shifted my natural eye lens away from its original place. I now wear spectacles as a result. However, switched to contact lenses when I started working.

In Boston, Toronto and Ottawa, I was terribly homesick at many points in time. Every summer I used to end up in India to meet my family and friends. It does get lonely up there if you aren’t connected well with fellow Canadians or even Indians. As long as you have close ties in Canada, you needn’t worry! Networking is everywhere, you just need to look at the right places! You will be a true Indian at heart where you are settled.

I have never left my identity as an Indian. From learning Hindi in the International School in Bangkok (Bangkok Patana School) at age of 3-5 years from 1994-1997 to ordering Bollywood VCDs/VHS in Brussels and furthermore using the power of digital media to watch Bollywood Movies and also attend concerts of prominent Indian personalities like AR Rahman and the prestigious Indian Oscars – IIFA in Toronto. I have sharp memories of each event.

Patriotism to the Nation – Jai Hind!

I love India and its people. We are scattered at different global touchpoints. We together form a close-knit network of intellectuals.